Proud To Be An American: The Lee Greenwood Story To Premiere On FOX Nation July 1 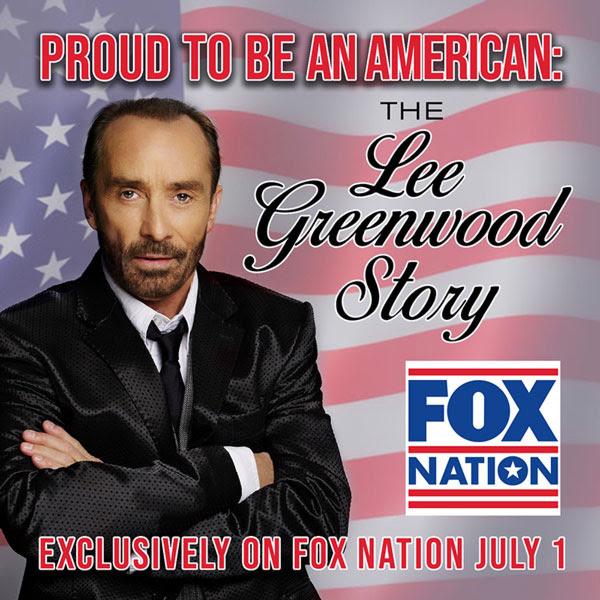 As Americans celebrate Independence Day, Lee Greenwood, America’s most recognized patriotic ambassador to be the focus of a new documentary Proud To Be An American: The Lee Greenwood Story premiering on FOX Nation July 1. Highlighting his career, this documentary will include interviews with the entire Greenwood family as well as some of his closest friends and colleagues. Continuing the Independence Day weekend celebration, Greenwood will share his appreciation by making several appearances when he takes the stage in Coeur D’Alene, Idaho (July 1), Jefferson, Iowa (July 2), Provo, Utah (July 3), and Saint Louis, Missouri (July 4).

“Independence Day is a special day for all Americans,” says Greenwood. “It’s always an honor to perform ‘God Bless The U.S.A.’ anywhere that Americans will hear it. The song was written to unite all Americans and bring hope and courage during times of crisis. It is great to be back on the road and performing this year live.”

To keep up with future events and the latest updates follow Greenwood’s socials linked below.

About Lee Greenwood:
Throughout his expansive career, international country music icon Lee Greenwood has earned multiple CMA and ACM Awards, a Grammy Award for Top Male Vocal Performance on “I.O.U,” in 1985, and a multitude of other prestigious awards nominations. His discography includes twenty-two studio albums, seven compilation albums, seven No. 1 hits, and thirty-eight singles including songs like “It Turns Me Inside Out,” “Ring On Her Finger Time on Her Hands,” “She’s Lyin’,” “I Don’t Mind the Thorns if You’re the Rose,” “Dixie Road,” “Somebody’s Gonna Love You,” “Going Going Gone,” “You Got A Good Love Comin’,” among others.

His stand-out hit “God Bless the U.S.A.” has been in the top five on the country singles charts three times (1991, 2001, and 2003), giving it the distinction of being the only song in any genre of music to achieve that feat. It reached the Top 20 of the Billboard Hot 100 chart shortly after 9/11. Known for his stand-out patriotism and support of the U.S. military, Greenwood has been honored with the Congressional Medal of Honor Society’s National Patriot’s Award and entertained troops on more than 30 USO Tours.