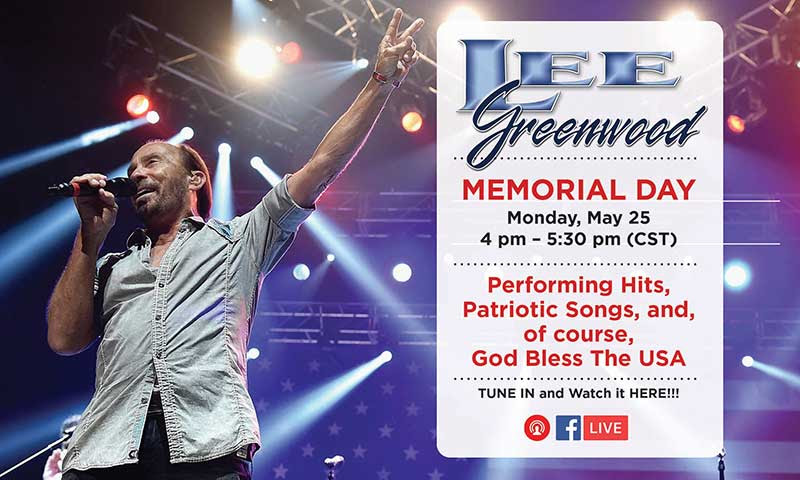 NASHVILLE, Tenn. – As Americans observe and honor all those who have served, lost their lives, and active duty members of The United States Armed Forces this Memorial Day, patriotic singer/songwriter and Grammy award winner Lee Greenwood shares his appreciation by presenting a virtual Facebook concert dedicated to all who have fought for our freedoms. Greenwood will be performing hits from throughout his career such as “I.O.U.”, “Dixie Road,” “Ring On Her Finger, Time On Her Hands” as well as popular patriotic songs and of course, his hit single “God Bless The USA.” Join Lee Greenwood in paying tribute to these heroes at this exclusive virtual event on Monday, May 25th at 4:00PM CST on Lee’s facebook page as well as Navy Entertainment and Navy Exchange.

“Every Year I look forward to this weekend honoring the men and women who have given all for our freedom” says Lee Greenwood. “Usually, I’m touring across America celebrating Memorial Day. However because of the Pandemic, we are sitting at home to keep everyone safe. So I decided to create a virtual concert as my gift. We need to celebrate America now more than ever.  Please join me on Facebook May 25th at 4 pm central for our performance of super hits and our tribute to those who have given us the right to do so.”

Now available on Lee Greenwood’s website are specially designed patriotic “Proud To Be An American” and “God Bless The USA” t-shirts and hoodies. These items feature Greenwood’s signature lyrics on the front and back and are available to purchase just in time for Memorial Day and Independence Day!

To keep up with future events and the latest updates follow Greenwood’s socials linked below.

About Lee Greenwood:
Throughout his expansive career, international country music icon Lee Greenwood has earned multiple CMA and ACM Awards, a Grammy Award for Top Male Vocal Performance on “I.O.U,” in 1985, and a multitude of other prestigious award nominations. His discography includes twenty-two studio albums, seven compilation albums, seven No. 1 hits and thirty-eight singles including songs like “It Turns Me Inside Out,” “Ring On Her Finger Time on Her Hands,” “She’s Lyin’,” “I Don’t Mind the Thorns if You’re the Rose,” “Dixie Road,” “Somebody’s Gonna Love You,” “Going Going Gone,” “You Got A Good Love Comin’,” among others.