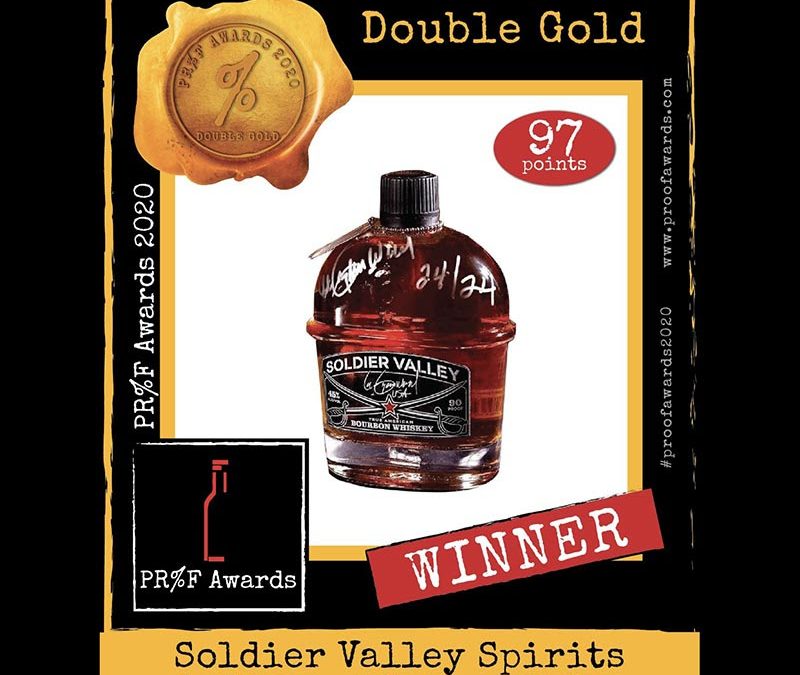 OMAHA, Neb. – Lee Greenwood Signature Bourbon took home the DOUBLE GOLD from Food & Beverage Magazine’s 2020 PR%F awards, scoring 97 points, as announced in their February 2021 issue. Great spirits flowed together in camaraderie and amazing tastings when over 40 spirit industry leaders gathered for the PR%F Awards 2020 and PR%F Awards Design distinction. Upwards of 700 spirits and wine brands and other beverages were submitted for consideration during the two-day, double-blind tasting point-rating competition held at Green Valley Ranch Resort in Las Vegas in early December. The partnership between Greenwood and Nebraska-based Soldier Valley Spirits won alongside other notable iconic brands and celebrity entries.

“When you spend so much time making an album, you just hope people like it and ultimately hope it gets nominated or wins an award. I never thought I would have that same feeling when working on the creation of this bourbon whiskey,” says Greenwood. “I am so looking forward to Memorial Day when the product hits the shelves of liquor stores.”

“I’m excited to have Lee Greenwood on board with Soldier Valley Spirits and with his Signature Bourbon,” said Soldier Valley Spirits founder, Jeff Hadden. “From the time I met Lee, our moral compasses have aligned. We both love our country and appreciate our military, veterans, and first responders, and all they do for us.”

“The competition was a huge recognition that our beverage industry is still highly progressive and moving forward despite the world’s current affairs,” said Michele Tell, executive director of PR%F Awards. “The innovation, creativity, and passion toward creating the ultimate beverage, in many categories, was represented beautifully by all of the submissions coming into our competition this year.”

The PR%F Awards 2021 is set for September 21-22 in Las Vegas. For more information, visit www.proofawards.com.

About Lee Greenwood Signature Bourbon:
This special ‘90 proof’ bourbon whiskey is bottled in a canteen-shaped bottle embossed with the number “6” and includes a hanging military-style dog tag showcasing the letters “LG”. The silver foil label contains the replica signature of Lee Greenwood. As announced in Whisky Advocate, the special blend of bourbon will be at retail by Memorial Day 2021! For more information on Soldier Valley Spirits, or to pre-order, visit soldiervalleyspirits.com.

About Lee Greenwood:
Throughout his expansive career, international country music icon Lee Greenwood has earned multiple CMA and ACM Awards, a Grammy Award for Top Male Vocal Performance on “I.O.U,” in 1985, and a multitude of other prestigious awards nominations. His discography includes twenty-two studio albums, seven compilation albums, seven No. 1 hits, and thirty-eight singles including songs like “It Turns Me Inside Out,” “Ring On Her Finger Time on Her Hands,” “She’s Lyin’,” “I Don’t Mind the Thorns if You’re the Rose,” “Dixie Road,” “Somebody’s Gonna Love You,” “Going Going Gone,” “You Got A Good Love Comin’,” among others.

His stand-out hit “God Bless the U.S.A.” has been in the top five on the country singles charts three times (1991, 2001, and 2003), giving it the distinction of being the only song in any genre of music to achieve that feat. It reached the Top 20 of the Billboard Hot 100 chart shortly after 9/11. Known for his stand-out patriotism and support of the U.S. military, Greenwood has been honored with the Congressional Medal of Honor Society’s National Patriot’s Award and entertained troops on more than 30 USO Tours.

Greenwood was appointed to the council of the National Endowment for the Arts in 2008 by President George W. Bush, confirmed by the United States Senate, and continues to serve on the NEA at the pleasure of the President. His latest book release is a children’s book called Proud To Be An American, which is currently available at leegreenwood.com.