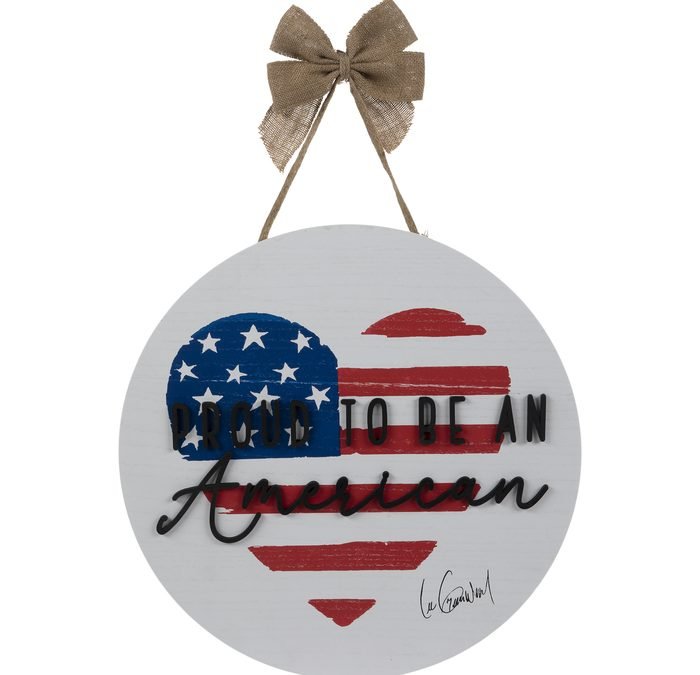 NASHVILLE, Tenn. – As the second piece of the exclusive Hobby Lobby Lee Greenwood Collection rolls out, Americans can show off their love for our country as they display this ‘Proud To Be An American‘ Wood Wall Décor piece! This MDF round wood shape boasts a white background, a heart shape overlaid with the American flag’s stars and bars, and elevated black text that reads ‘Proud To Be An American.’ Hang it up by its burlap bow and celebrate the land you love from sea to shining sea!

The initial ‘Sea To Shining Sea’ Wood Wall Décor piece, which launched The Lee Greenwood Collection at Hobby Lobby sold out in four days. More pieces including wall décor, textiles, and home goods will be announced in the coming months!

About Lee Greenwood:
Throughout his expansive career, international country music icon Lee Greenwood has earned multiple CMA and ACM Awards, a Grammy Award for Top Male Vocal Performance on “I.O.U,” in 1985, and a multitude of other prestigious award nominations. His discography includes twenty-two studio albums, seven compilation albums, seven No. 1 hits, and thirty-eight singles including songs like “It Turns Me Inside Out,” “Ring On Her Finger Time on Her Hands,” “She’s Lyin’,” “I Don’t Mind the Thorns if You’re the Rose,” “Dixie Road,” “Somebody’s Gonna Love You,” “Going Going Gone,” “You Got A Good Love Comin’,” among others.

His stand-out hit “God Bless the U.S.A.” has been in the top five on the country singles charts three times (1991, 2001, and 2003), giving it the distinction of being the only song in any genre of music to achieve that feat. It reached the Top 20 of the Billboard Hot 100 chart shortly after 9/11. Known for his stand-out patriotism and support of the U.S. Military, Greenwood has been honored with the Congressional Medal of Honor Society’s National Patriot’s Award and entertained troops on more than 30 USO Tours. Greenwood was appointed to the council of the National Endowment for the Arts in 2008 by President George W. Bush, confirmed by the United States Senate, and continues to serve on the NEA at the pleasure of the President. His latest book release is a children’s book called Proud To Be An American, which is currently available at leegreenwood.com.