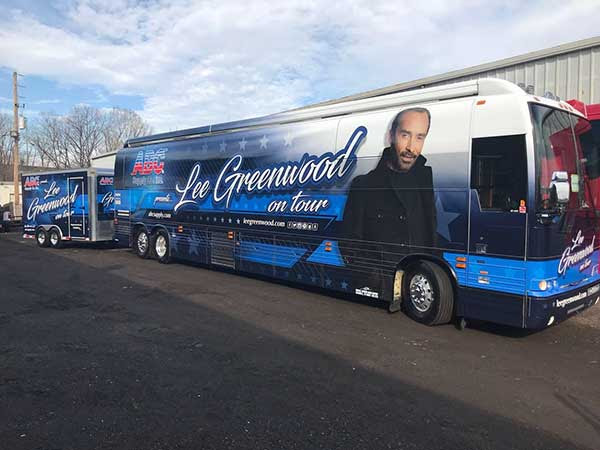 NASHVILLE, Tenn. — Grammy-winning Lee Greenwood and ABC Supply Co. Inc., one of the country’s largest wholesale distributors of roofs, windows and other home building products, will continue their tour sponsorship throughout 2020, as announced today.

When Greenwood was invited to sing “God Bless the USA” at the 2017 ABC Supply National Managers’ Meeting, it became apparent that he and ABC Supply embraced the same principles of liberty, community and pride in being an American.

“As I stated in my song, ‘God Bless the USA,’ ‘There ain’t no doubt I love this land.’ My love of the land came from being raised on a farm in California and singing for USO shows while I was still in high school. I felt that same sense of pride from everyone I met who works within the framework of ABC,” said Greenwood.

ABC Supply Co. Inc., based out of Beloit, Wisconsin, was founded on a vision that would give people who work hard the opportunity to accomplish the American dream. This patriotic vision—coupled with their deeply rooted commitment to honor and respect those who serve in our nation’s military—is why American pride is one of ABC Supply’s core values.

“Lee represents the same core values that are at the heart of our company, and we are excited to continue his relationship with the ABC family,” said Mike Jost, ABC Supply’s Chief Operating Officer.

For more information on Lee Greenwood, visit his website at leegreenwood.com. or to schedule an interview, please click here.

About Lee Greenwood:
Throughout his expansive career, international country music icon Lee Greenwood has earned multiple CMA and ACM Awards, a Grammy Award for Top Male Vocal Performance on “I.O.U,” in 1985, and a multitude of other prestigious award nominations. His discography includes twenty-two studio albums, seven compilation albums, seven No. 1 hits and thirty-eight singles including songs like “It Turns Me Inside Out,” “Ring On Her Finger Time on Her Hands,” “She’s Lyin’,” “I Don’t Mind the Thorns if You’re the Rose,” “Dixie Road,” “Somebody’s Gonna Love You,” “Going Going Gone,” “You Got A Good Love Comin’,” among others. His stand-out hit “God Bless the U.S.A.” has been in the top five on the country singles charts three times (1991, 2001 and 2003), giving it the distinction of being the only song in any genre of music to achieve that feat. It reached the Top 20 of the Billboard Hot 100 chart shortly after 9/11. Known for his stand-out patriotism and support of the U.S. Military, Greenwood has been honored with the Congressional Medal of Honor Society’s National Patriot’s Award, and entertained troops on more than 30 USO Tours. Greenwood was appointed to the council of the National Endowment for the Arts in 2008 by President George W. Bush, confirmed by the United States Senate, and continues to serve on the NEA at the pleasure of the President. His latest book release is a children’s book called Proud To Be An American, which is currently available in stores, on Amazon and leegreenwood.com.

About ABC Supply:
ABC Supply Co. Inc. is the largest wholesale distributor of roofing in the United States and one of the nation’s largest wholesale distributors of select exterior and interior building products. Since its founding by Ken and Diane Hendricks in 1982, ABC Supply’s sole focus has been serving professional contractors—taking care of them better than any other distributor and offering the products, services and support they need to build their businesses. An 11-time Gallup Great Workplace Award winner, ABC Supply is an “employee-first” company that treats its associates with respect and gives them the tools they need to succeed.

Headquartered in Beloit, Wisconsin, ABC Supply has more than 700 locations nationwide. More information is available at abcsupply.com. Contractors can find resources for growing and improving their businesses on ABC Supply’s blog and the company’s LinkedIn page.
# # #
Suggested Tweet:
.@TheLeeGreenwood and #ABCSupply continue tour sponsorship into 2020